I kept hearing about this theory called the “electric universe theory”, and wondered what it was all about. An ex-work colleague was quite worked up about it and even lent me some books. What was this theory and where on earth did it come from?

According to the website www.electricuniverse.info the “Electric Universe theory highlights the importance of electricity throughout the Universe. It is based on the recognition of existing natural electrical phenomena (eg. lightning, St Elmo’s Fire), and the known properties of plasmas (ionized “gases”) which make up 99.999% of the visible universe, and react strongly to electro-magnetic fields.” It goes on to state “Electricity is common throughout the universe, generated by all cosmic plasma as it moves through magnetic fields. Peer reviewed papers describe electricity in the Sun, and associated with the interplanetary medium (solar wind), planets and their satellites, comets, in interstellar space, other stars, and intergalactic space.” Well that sounds pretty convincing, doesn’t it?

We astronomers often stumble across new theories, and after a while a certain degree of ‘learned scepticism’ enters the fray. So I decided to take a closer look at this theory. The theory seemed to be all encompassing and rather difficult to pin down, so in order to do this, I focused on what the theory has to say about our sun in particular. Astrophysicists say that stars, including the sun, are powered by nuclear fusion. However electric universe theorists say this is not so. The reasons given are that:

Well that all sounds very plausible and ‘scientificy’. But let’s take a closer look at the arguments one by one.

Neutrinos have not been found?

A neutrino is a particle smaller than an atom with an incredibly small mass to it. They are similar to electrons, but don’t have a charge. They usually travel close to the speed of light, and not having a charge means they are unaffected by electromagnetic forces like other matter, and are able to pass through ordinary matter almost unaffected.

Neutrino observatories are actually underground because the neutrinos pass right through the earth. Neutrinos are created as a by-product result of nuclear fusion (in a nuclear plant or the sun) or when cosmic rays hit atoms. Every second about 65 billion solar neutrinos pass through every square centimetre of earth facing the Sun. Because they have a mass, neutrinos can interact with other particles via gravity.

Scientists have been detecting the effects of neutrinos for years, and they match the predictions exactly. If an alternative theory is to be considered, scientists would need to reject the theory of nuclear fusion at the centre of a star. This would also necessarily lead to rejection of the theories of thermodynamics, gravitation, nuclear physics, statistical physics, electromagnetism, hydrodynamics and magnetohydrodynamics. In other words, most of physics would need to be rejected to address the problem of the ‘missing’ neutrinos.

Electric universe theorists argue that these neutrinos have never been detected, and those inferred by their effects are about half of what would be produced by a fusion reaction in the sun.

Some of you will be familiar with quantum mechanics, where all particles can have both wave and particle properties. Well, neutrinos are confusing too, as they have mass and therefore qualify as a particle. When they are detected they have a probability of being either an electron neutrino or a tau neutrino. We have electron neutrino detectors, and once we build a tau neutrino detector the ‘flux’ will add up to the exact amount to solve the solar problem. So maybe it is a bit premature to throw physics out just yet.

Convection in the sun is impossible?

Electric universe theory argues that the granulation we observe on the surface of the sun cannot be caused by convection bubbling up the layers of the sun. This is based on an assumption by a man called Juergen, that one of the values used in fluid dynamics, the Reynolds number, causes the convection, and at certain values convection cannot occur.
If you imagine a parcel of matter inside the sun towards the surface as the sun’s heat causes it to rise and falling back towards the centre as it cools (like boiling water), the Reynolds number describes a function of the parcel size, length and stickiness.

In physics, the inverse square law states that a specified physical quantity or strength is inversely proportional to the square of the distance from the source of that physical quantity. So in other words if you move from two metres to four metres away from a heater you increase the distance by two, but decrease the energy by four times (four is the square
of two). Electric universe theory says that because the sun is coolest at its surface, then the temperature jumps up again out at its halo, it does not obey the inverse square law, and physics is wrong.

At this point it is important to note that the inverse square law only applies to radiant energy (as opposed to convection or conduction) and only in a vacuum. When energy moves through an atmosphere (such as the corona of the Sun) then the law does not hold. In addition, the inverse square law applies to all energy, not just heat. The colder ‘surface’ (photosphere) actually has more energy. The energy drops dramatically at the corona as we would expect. There are a myriad of explanations for the temperature differences, none of which involve throwing out physics as we know it.

The sun’s variations prove it is a bag of plasma?

Electric universe theory says that the variations in the sun every 2 hours and 40 minutes or
so can only be explained if the sun was a big bag of gas undergoing periodic electrical discharge. Juergen cites some research that shows this period is what we would expect from a homogenous sphere, rather than the accepted layered model of the sun found in
textbooks. Well that is a problem ... isn’t it?
OK, time for some context here. The research cited was in 1976 and the authors stated that it applies only if they are p-mode oscillations. But back then we didn’t have the technology to distinguish between p-mode and g-mode oscillations. Later research, available to the electric universe theorists, showed they were gmode, so basically all the assumptions based on this research went out the window. It doesn’t matter too much what the modes are, the point is that the electric universe theory was based on outdated information from 1976. Very poor research indeed!

The solar wind is caused by an electric field?

In physics an electric field applied to charged particles cause them to accelerate. The
Electric universe theory says that the solar wind is the result of such a field, and the Sun is electric, not fusion based.

Maxwell’s theory of acceleration, however, talks about a time variable field, not a fixed one, and what’s more the solar wind contains both positive and negatively charged ions (protons and electrons mainly). An electric sun would be positively charged and all the negatively charged electrons would be attached to it – not be pushed out from the Sun on a solar wind. This fact proves the Sun is not electric.

And then the wheels fell off…

Well, it seems this is not a theory that anyone should be hanging their hat on. However, I will say that my little exploration did lead me to learn an awful lot about neutrinos, and our Sun. I hope that next time you read an outlandish theory you might take this journey too. You never know what you might learn. 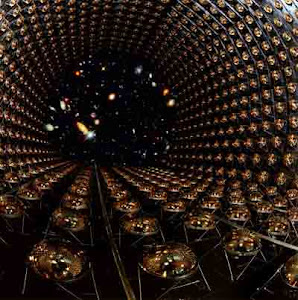